Yesterday, March 17, German news reported that the German capital Berlin ”has approved plans ahead of a expected spike in corona or COVID-19 infections”. It is planned to make use of the large Berlin Messe trade fair exhibitions grounds in the Charlottenburg-Wilmersdorf district; a facility that every year, for instance, hosts the world’s largest farmer trade fair in late January. The plan is that the Berlin Messe will house up to 1 000 patients and both relatively minor corona virus cases as well as emergency respiratory patients will be treated. 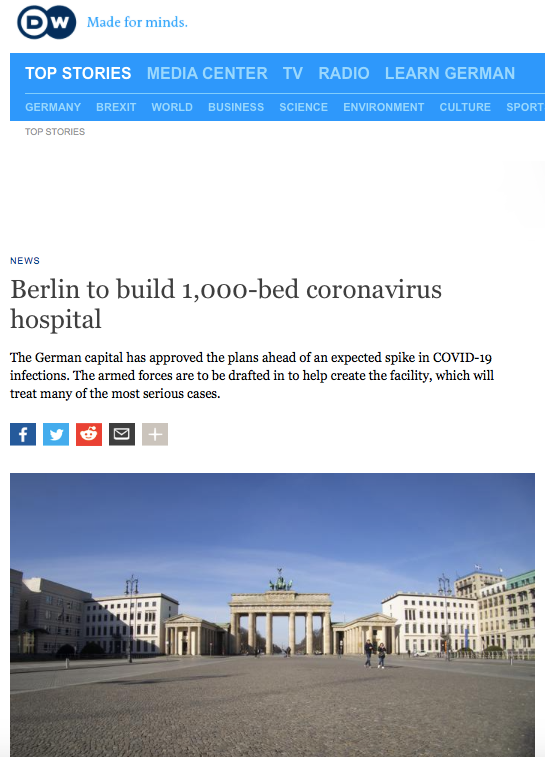 Berlin Health Senator Dilek Kalayci said that ”This measure complements the well positioned Berlin hospital system to deal with possible bottlenecks” at the same time as existing hospitals in Berlin will expand their capacity to treat patients requiring ventilation in intensive care.

In parallel, hospitals in Berlin are beginning to postpone scheduled non acute surgeries in order to prepare the treatment of more patients tested positive for the corona virus.

Perhaps the most interesting part here is that German media further reports that the German armed forces, the Bundeswehr, will be drafted to help create the desired facility. We are convinced that this is how the military can and should be used and especially during crises. This time it is definitely something that poses a threat to citizens´ lives. That is the lives that any armed forces are allocated to protect.

In a time when peoples’ movements are restricted, the same should also apply for the military. But, all resources including military resources should also be put to use for humanity without risk of harm to civil society. We are looking forward to learn how this is done as military exercises are discontinued in favour of dealing with a real threat.

We are already aware of further such examples in, for instance, Norway and Sweden, but also in the United States. We plan to publish updates on the subject.

Stay tuned. Don’t forget to support our call and ask others to do the same.

On Tuesday, March 17, Berlin counted 332 of more than 7 500 cases of corona across Germany. The number of corona infected patients increased with 1 500 cases from the day before, Monday. So far 20 have not survived the pandemic virus infection and 500 are hospitalised.

During the next few months, German officials are expecting a much higher volume that will require hospital treatment after being tested positive for the corona virus. To, with the help of the German armed forces Bundeswehr, make use of the large exhibition hall in Berlin is one measure to try to contain the pandemic and ensure that the country’s health sector can cope.

Other measures includes that ”schools have been shut across most of the country, border controls have been tightened and new restrictions put on public and social spaces. Companies are being urged to offer employees remote work”. 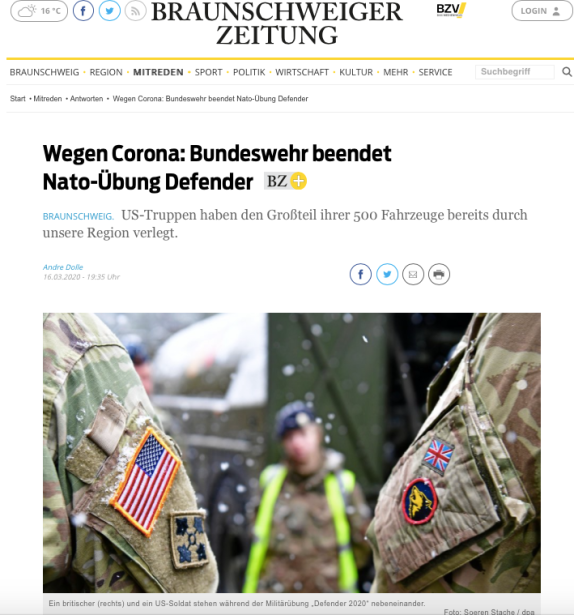 However, some parts of the large-scale military exercise Defender Europe 20, i.e. the largest military exercise in 25 years in Europe, seems to still be on. Bundeswehr, which is responsible for host nation support during Defender Europe 20, on Monday, March, 16 said that they already had completed the major maneuvers and EUCOM expressed something similar in an update on Defender Europe 20. At the same time; Italy, a nation severely affected by the corona virus, officially withdrew their participation in the exercise. The United States has said that they are significantly reducing their participation after the Secretary of Defence’s travel bans for American soldiers and personnel went into force on Monday, but they also say “We anticipate the armored brigade combat team already deployed to Europe will conduct gunnery and other combined training events with Allies as part of a modified Allied Spirit exercise“.

Both American soldiers in Europe and senior military officials from at least two European countries who recently attended an annual NATO-meeting at an American military base in Wiesbaden, Germany as well as staff at the NATO headquarter in Brussels have been tested positive for the corona virus. In Europe, in the United states and around the world, cases of corona infected solders are reported. These soldiers and those they have spent time together with are put in quarantine, but some are still expected to conduct military exercises in Europe and elsewhere during the ongoing pandemic.