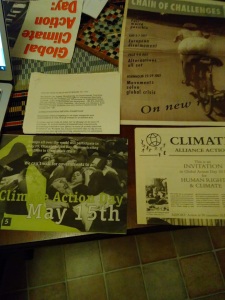 The history of the climate movement is a rich history filled with drastic changes in both political content and forms of action. To many this might sound odd as the climate movement is presented as something very new and if it has older roots it is a history not about collective movement efforts but about individuals and their initiatives. The few attempts at writing a history also present a narrative of something small becoming bigger and bigger without changing the direction.

This attempt at writing a history of the climate movement is different. It uses a popular movement perspective seeing democratic collective efforts locally, nationally and internationally as the key for understanding social change so we can learn and move forward.

It is based on the oral Swedish definition of a popular movement as a collective effort over a longer period of time using different ways of working combining living as you preach and changing society at the same time. A combination often hard to achieve but can be seen as crucial during periods when a movement is growing.

It is also based in an understanding of popular movements as linked to each other. Something we can talk about a ”popular movement complex” in the way E.H. Thörnberg did the first half of the 20th century. An idea that may show us that the separation of movements at times are arbitrarily or a Western phenomena that looks very different if we look upon how a movement is organized in other parts of the world. It is also based on the study of the global history of popular movements by Jan Wiklund who today works in the same tradition as Thörnberg.